The renovation project is 0.17 miles and is located along the Detroit River, bound by the Detroit River to the south, Wight Street to the north, the former Uniroyal property to the east, and the United States Coast Guard facility to the west within the City of Detroit.

Thanks to CCC and Tooles Contracting Group, there’s now a spot in the “D” where your family can beat the heat and enjoy the views of the Detroit River, too.

With a Great Lakes schooner theme, the renovated Mt. Elliott Park & Pavilion riverfront splash park lures kids with water cannons and cascades that are prime for a summer splash.

“Designed with a playful water feature and amenities for all ages, the new park will be another huge draw for visitors and families to this growing world-class destination,” says Matt Cullen, the conservancy’s board chairman.

Mt. Elliott is the third park to be redeveloped by the organization on its goal to develop five-and-a-half miles of riverfront, from west of the Ambassador Bridge to east of the MacArthur Bridge to Belle Isle.

The scope of work included the construction of a pavilion, universally accessible water feature/play-scape, tensile structure, reshaping the shoreline and non-motorized path. The park is LEED Certified. 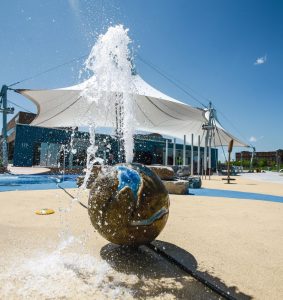